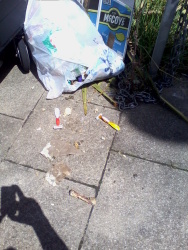 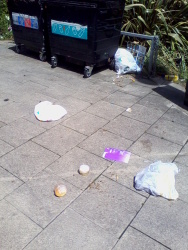 NEW ENGLAND STREET CORNER (WITH BELMONT STREET): Constant and deliberate fly-tipping of rotting food ( we have seen a white middle-age bald man dumping the rotting meat). It's every day. We pick up the animal bones (chicken etc) but the rest is too disgusting to pick up. Could you put a big rubbish collection bin there so the fly-tippers have no excuse but to put their rotting rubbish in the bin.