Reported via iOS in the Roads/highways category by Ronnie Abrams at 14:44, Fri 2 June 2017 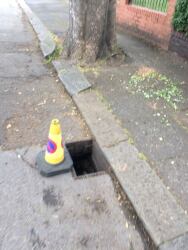 Street grid on Alpha road outside house number 11 is missing mysterious ?? Myself and neighbours have just noticed today Friday 2/6/17! I have placed a cone to protect the public.